This week we had brought again items from the collection to the Salesian Sisters in Lviv and also transported medicines and other things to those in need. “Las Rąk” provided us with 1,000 sandwiches, 200 donuts, and a large number of cakes and sweets for children. Some of them we left in Ukraine, near the border crossing in Hruszów. Everything that we took was at the main train station in Lviv. The need for food among people fleeing the East and waiting for a train or bus to Poland was high. Supplies of sandwiches and cakes dispersed quickly. There are still many migrants at the station itself. Volunteers and signs reading “line up for a train to Poland” help guide people. As Sister Jolanta Lisak says, it’s a bit looser now, a big wave of migrants has passed but still, they expect the next wave.

In front of the station building, where there are tents of different humanitarian organizations, we met Capuchin Father Jeremiasz, a German who came to Lviv a few days ago with a brother. He has committed himself to help at the Lviv train station and together with other volunteers he prepares hot food for people and distributes sandwiches. As he put it, “We serve here, but not only by distributing food to refugees who want to go to Poland. People come up to me and ask me to bless them. Soldiers come, men and women because they are afraid of war, but they have to go and defend the country. I bless them not because they kill people, but because they have the strength to defend their country.” Father Jeremiasz helps every day from 9:00 am to 6:00 pm, very often as a priest and psychologist.

On our return, we picked up people who were fleeing the war. They flew from Kyiv, Kharkiv, Sumy, and Zhytomyr. In one of our 3 buses, we took Svetlana and her 4 children aged 1.5, 5, 11, and 16. They escaped from Zaporizhzhia. They arrived in Lviv by train which was hit by the Russian army on the way. The lights on the train had to be turned off.

We always try to take care of the people we transport to Poland. We look for the accommodation, take them to the reception points or to the place where they will live. We help them to find their place in Poland. 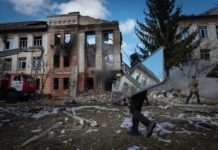 News from Odessa – a letter from Sister Teresa